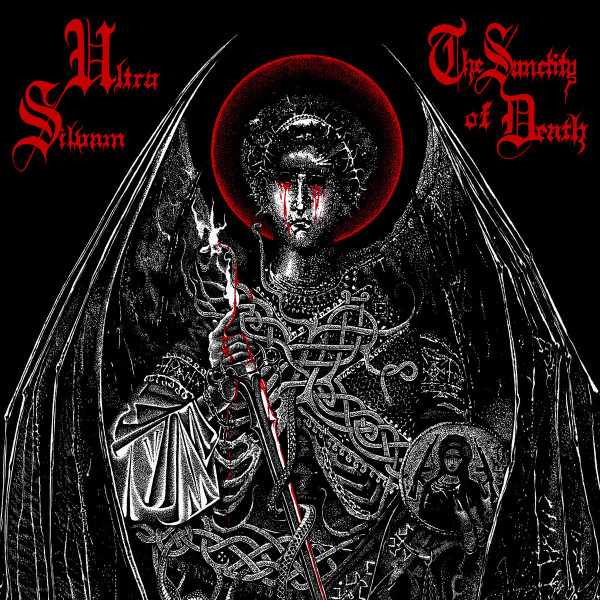 It was but March 2019 when Sweden’s ULTRA SILVAM displayed the full furl of their powers with the debut full-length The Spearwound Salvation. In a mere deadly 28 minutes, the power-trio swiftly ‘n’ succinctly asserted their identity, proudly upholding their home country’s history of melodic black metal during the glorious ‘90s but driving toward something uniquely their own – and VIOLENTLY so. In fact, ULTRA SILVAM’s execution alone was palpitating: every ringing chord, every bashed drum, and every slaughtered tongue bled an authenticity that was refreshing to behold. The fact that they lock-welded such unsafe (and unsterile) execution to dazzling ‘n’ dynamic songwriting made The Spearwound Salvation all the more impressive.

A daunting task, indeed, but ULTRA SILVAM return to eclipse that feat with their second full-length, The Sanctity of Death. As suggested by its title, The Sanctity of Death bears a more regal aspect to the band’s undulating coils of coruscating violence…but “regal” is only relative here. For ULTRA SILVAM let loose with a whole host of more wholly HEAVY METAL moves that are turned into tornado-like torrents of black metal classicism. Verily, The Sanctity of Death slices and swaggers with addicting aplomb, the band seemingly drunk on their own power as they dole out teeth-gnashing screeds of sin, salvation, and swallow-your-soul darkness. It’s more immediately memorable and more incredibly finessed, as that crazed execution of yore remains but has been tightened up ever so slightly, allowing these eight bangers & clangers to create an all-enveloping atmosphere of delirium and dementia. You’ll be winded after the album’s over, perhaps, but emboldened by bountiful visions of a dread future – and one worth returning to again, and again, and again.

Possession guaranteed, then, The Sanctity of Death is the natural follow-up to The Spearwound Salvation, brewing in the minds of ULTRA SILVAM ever since. Featuring recording by Devo Andersson (MARDUK) in Endarker Studio, Norrköping, and mixing & matering by Marco S. Vermiglio at The Forge Music Production and completed by compelling cover art by Samuel E. Thomas (Set33), The Sanctity of Death is ULTRA SILVAM’s grandest strike yet!