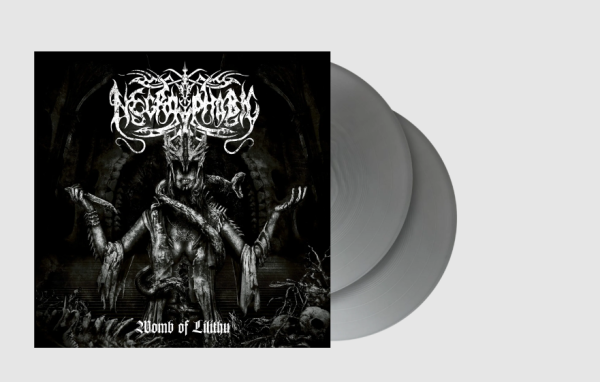 With thirty years of active, nefarious service under their bulletbelts, NECROPHOBIC are undisputed legends of the death and black metal underground. Formed in 1989 by drummer Joakim Sterner, the Stockholm based outfit propagated a singular and fearless vision from the very start, confirming their prowess with now legendary debut album The Nocturnal Silence in 1993. Eschewing the self-conscious amateurism and primitive sonics that many of their peers held dear, NECROPHOBIC established a bold and vivid identity of their own, conjuring a densely melodic but endlessly wicked take on macabre extreme metal that countless lesser bands have since emulated. With ‘Womb of Lilithu’ NECROPHOBIC re-release their seventh full-length record, which was originally released in 2013. The Swedish black death metal legends are re-launching this album as the last one of nine re-issues in total. Other than the original album version from 2013 this re-issue features two live tracks as bonus on the D-side, which never have been published before. NECROPHOBIC show themselve on ‘Womb of Lilithu’ from different musical sides and guide the listener through a deep black summoning ritual accompanied by a well-balanced mixture of rawness & transparency also with regard to their production. '’Womb of Lilithu’' is once again a wonderful work of a black death-metallic sound art from Sweden. Like the earlier re-releases ‘Hrimthursum’, ‘Death To All’ and ‘Satanic Blasphemies’ this year, ‘Womb Of Lilithu’ was also remastered by Dan Swanö at Unisound Studio. The album will be available as Ltd. CD Jewelcase in Slipcase, Gatefold 180g double black LP including 2-page insert and a double-sided A2-sized Poster and Digital album.